Recent news that Randy Anderson had died left me with the kind of nostalgia such events usually do, not to mention a sincere sense of loss. Randy was a good and decent man who, in my experience, never spoke a harsh word against anyone. These kind of folks are hard to find these days. Social media has made of us all occasional mongers, practitioners of the cut and run insult or off-color remark. I am myself guilty of this.

I first met Randy in December of 1984. He had preceded me in the City and County of Denver’s Purchasing Division as a newly hired buyer by a couple of months. I arrived in mid- or late- December to find an enormous workload left by a tacit expulsion of the old guard from the division. This was the era of Federico Pena’s Imagine a Great City mantra where many longtime city employees who’d served through the McNichols’ years were necessarily seen as relics of an outmoded system of governance, and were viewed as expendable by Feddie and the Dreamers. In fact, a rather pervasive atmosphere of shape-up or ship-out had been instituted in the purchasing division, and many old timers had chosen retirement or moving on to another agency rather than continuing to endure the pressure from Pena’s new purchasing director, one of the Dreamers who impressed me as ice personified. She did hire me, though, and for that, I was thankful.

Randy had come from an agency of the city called Denver Cares. And, what they cared about was getting the drunks off Denver’s streets, putting them in a dismal place in north Denver for a few hours or days to dry out where they could get some incidental medical attention and a hot meal. I believe Randy was on the intake crew, had seen his share of dismal at Denver Cares, and had understandably jumped at the chance to move to a white-collar position with the city.

Randy showed me the ropes when I first arrived in the division, and let me know what the lay of the personality landscape was. It also became eminently clear to me that Randy was a perpetually cool head in all that chaos, a peacemaker if you will, who usually responded to what I saw as a serious big deal with one of his smiles, and often calmed me down when my Irish temper had gotten the best of me.

Through the years, Randy and I became good friends. We helped one another out on a daily basis, both at work and personally. 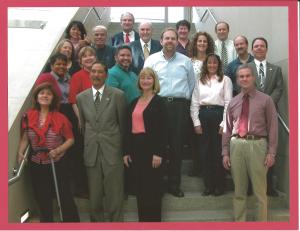 Our careers in the purchasing division mirrored each other’s, our promotions came at about the same time: Buyer I, Buyer II, Buyer III, Buyer Supervisor. We endured newly appointed purchasing directors mostly with a grain of salt, both knowing that the mayoral appointees came and went like musical chairs, but we would be there for the long haul. We suffered through the most egregious tyranny of an appointed director who was if not insane, at least on the fringe of a dark psychosis that tainted every minute of our workdays. If Randy had not been there at that particular time, I don’t believe I would have stayed in the division. Randy’s kindness, his humor, his smiles, and his immense capacity for forgiveness in the face of unmitigated meanness got us both through those difficult days.

I eventually became the director of the purchasing division, and Randy became my subordinate.

Randy at one point was diagnosed with lupus, an insidious disease that eventually cripples the body if not adequately controlled, and it is not curable. I believe Randy went through periods of immense pain. I say I believe that because I never heard him complain at all, to anyone. When his treatment involved heavy-duty steroids, his face swelled to a point that he was almost unrecognizable. He took to using a cane, his steps across the office that of a man twice his age. Very thin to begin with, Randy became almost a shadow of himself. But again, never a complaint, never a plea for sympathy, never using the disease as an excuse for anything.

Randy’s love for his family was one of his sustaining strengths. His wife, Johnnie, his daughter Marisha, an older daughter whose name I don’t recall, the grandchildren who I believe were raised in his home; all of them were his rock, sometimes his burden as the dynamic of family is for most of us. His faith in the Good Lord was unquestioning, intense, personal only until he joined his congregation in song, and gave his musical talents (he played the guitar) in praise of his Savior, his God. And I am reminded of the Psalm: I will sing to the Lord all my life. I will sing praise to my God as long as I live. May my meditation be pleasing to him, as I rejoice in the Lord. And I do believe without a doubt that Randy’s song was heard, and he will rejoice when his journey is complete.

I have lost touch with most of the old crew since I retired from the purchasing division. Consequently, I did not hear of Randy’s physical travails until a few days ago after he had died. I regret that. I regret not seeing him one last time when we could have laughed for a while about the old days, shared some of the better memories of our friendship, and perhaps have said good-bye.

This entry was posted in City and County of Denver. Bookmark the permalink.